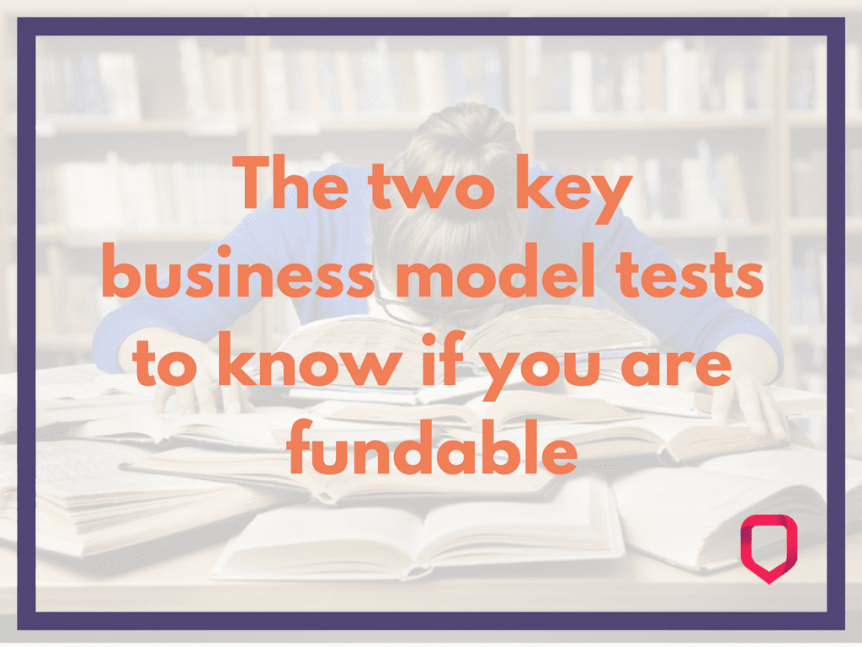 Raise and spend the cash. Whisper sweet awesome in the ears of customers to get them to sign up, only to churn. Hire amazing people only for them to lose faith and quit.

Like it or not, when you see these ‘stupid’ startups getting funded on TechCrunch they are actually doing something right. In fact, they are passing two tests that investors set to figure out if their business model makes sense.

Business models are a lot like teenage sex: everyone talks about it, nobody really knows how to do it, everyone thinks everyone else is doing it, so everyone claims they know what theirs is

Most people really just don’t get business model strategy. The cool thing is there is an easy way to know if you get it wrong!

You’ll know you messed up when you are desolate and broke in a year!

But more seriously, you know a business model does not work when you fail the:

Now please remember, you are not set up to raise. You are setting up to cash out, so your business model really does need to make sense if you want to make cash.

The most common time you’ll fail is the narrative test because this is the story you are going to be telling people every day. It’s the passionate story you weave.

The numbers test is actually more important, as it’s core to your business viability. You can’t really fake your numbers. They’re outputs. They’re your traction and sort of tell your future.

To explain these, let’s use grocery related examples.

Do you want to play a game?

You know Priceline ‘name your price’, right? Well, they tried the same shizzle with soft drinks and failed the narrative test. Well, rather they came up with ‘Priceline Webhouse Club’ which did gas and groceries. You people could pick a price for cola and then Priceline would go to brand-conscious FMCGs and say give us 50 cents off and we’ll buy a million of those bad boys!

Um no. Do you know what big companies are like? They spend millions on branding so you buy Coke NOT Pepsi (which is gross- Coke told me so) and now you want them to just buy Coke like an asexual Kate Dillon in Billions!? Gosh, dang no!

It’s all very well to think you want to play power broker, but you need the leverage to play this game and the willingness of the suppliers to play too. Why would they allow Priceline to jack their swag and undermine their precious narrative of branding?

Having said that. Kayak and co successfully did this to some extent by doing flight aggregation. Amazing.

So, what’s wrong with the narrative? They assumed big brands wanted to play in the sandbox with Jimmy. Webhouse would in a Pavlovian sense, condition consumers to buy on price, not brand. That’s an epic f-up.

To play power broker like Robert Moses you need to build up the leverage (pricing power) which means having product. You need a product to build a customer base.

An iterative logic exception is thrown.

So Webhouse did what Groupon did and paid for discounts out of their pocket (Well they did at the start with Starbucks).

They threw money around like a P Diddy party and a few hundred million dolla dolla bills later they ran out of cash and investors who believed the story.

Instacart and on-demand businesses fail the numbers test. I presume you have heard of a concept called ‘unit economics?’

Groceries and restaurants, in general, have crappy margins, and for the later, restaurant owners are a pain in the ass (Trust me, Delivery Hero). Customers are also cheap and don’t want to pay for service, but expect a lot! There’s been attempts for a long time for startups to ‘disrupt’ something. They raise money and flame out. Remember WebVan?

If you have thin margins on your supply side and cheap customers on the other side, how do the numbers add up? Your business model unit economics (numbers) are as broke as MC Hammer. Insert something about CAC/LTV.

Actually, that’s so key. It’s such a SaaS thing though, Do you know how to calculate CAC/LTV in ecommerce and what the benchmarks are? I have friends who run really big funded companies have told me they don’t either.

Any investor is going to spend time analysing your numbers. Sure, they’ll look at the volume of your revenue/customers and trajectory of growth to figure if you are worth considering in the first place. Once they’re interested they’re going to dig into your metrics.

If your numbers don’t add up, then giving you money to do more of what you’re doing will just result in bigger losses. Sure VCs do that, but in the hope, your metrics will change for specific reasons.

There are frankly graveyards of startups that fail both tests or didn’t even know they had a pop quiz at all.

But. If you are not pushing the edge of possibility on the narrative test, you are not innovating.

The 2000 internet boom was a total shit show, but there were winners! Take eBay as an example. Meg Whitman joined eBay because of “the emotional connection between eBay users and the site.” The user behaviour was indicative of the potential power of the eBay brand, and unlike many interwebs startups starting up and flaming out, simply “couldn’t be done off-line.”

In other words, Whitman knew eBay passed the narrative test in a compelling and coherent manner, with the potential to eventually pass the numbers test.

The scope of eBay’s activities has a coherent narrative with their cost structure (the numbers test). What does that mean in practice?

eBay is lazy on purpose (A lie I also tell myself). They offer auctions and that’s it buddy!

After an auction is successful, sellers and buyers work out everything including logistics, payment and shipping themselves (though there is obviously PayPal).

Amazon, on the other hand, built FBA at great expense. Which long-term may be smarter, but let’s not get into that.

Recently Zenefits and Auto1 blow my mind in their devious smartness. The whole thing just connects. They are totally brilliant and contemporary. A frequent conversation I have with a PE friend is ‘how can we replicate Auto1 business model in another industry.’ It’s not how can we copy Auto1. It’s ‘how can we apply the brilliant narrative to another problem which will pass the numbers test’.

Hopefully, you’re starting to get that when you do something that makes sense, you make money, incur appropriate costs and so make long-term profit? It is that simple.

When it comes to writing your deck and pitching investors:

If you don’t well, ‘come back when you have more traction.‘

If you’re wasting hours on your pitch deck and want some help, reach out to Perfect Pitch Deck.