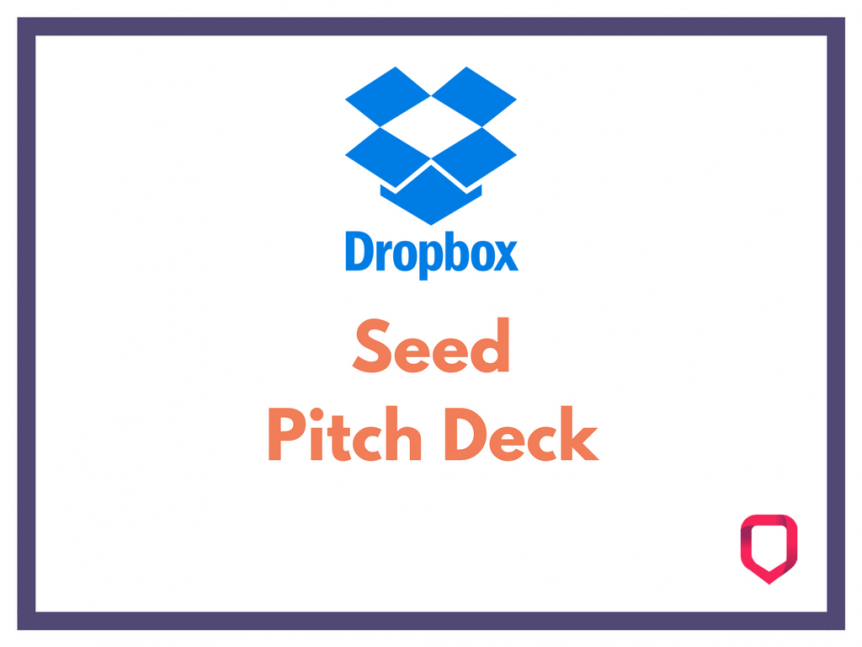 I’m going to take you through the deck slide by slide.

Dropbox simplifies the way people work together. 500 million registered users around the world use Dropbox to work the way they want, on any device, wherever they go. With 150,000 businesses on Dropbox Business, we’re transforming everyday workflows and entire industries.

We believe technology should get out of the way, so there’s no limit to what people can do together. We’re a thoughtful, tightly-knit team that’s committed to realizing ambitious ideas. We’re making technology work for the world, and the best is still to come.

The Dropbox pitch deck is 17 slides in total. People often reference founders should have a deck of around 10 slides, that just barely holds up in reality.

The deck isn’t amazing, but it’s solid. The appearance is pretty utilitarian but it communicates the information. With decks, you want to focus on the content and the story more than the design. Design adds a lot of credibility of course, but it doesn’t matter if your goal is to get a check and you don’t have the content.

The first page follows best practice. Just a logo and a tagline. Simple. They also add the URL so people can check out the site. The site is the first thing investors are going to check. 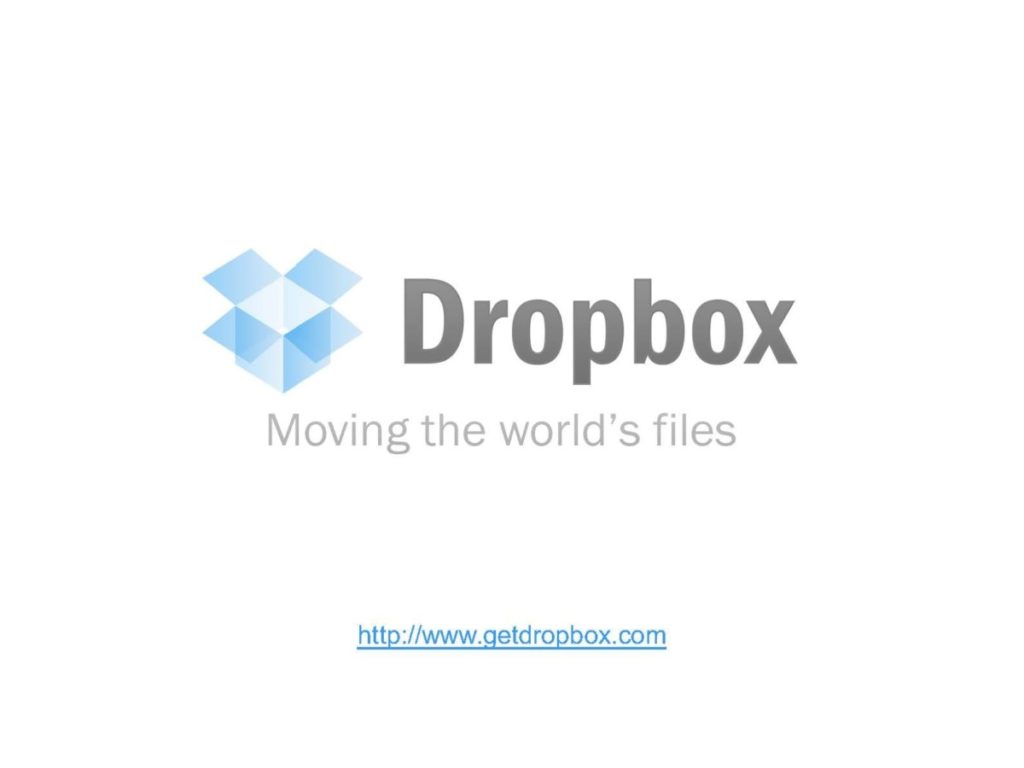 The problem slide is as simple as can be. An image and 4 words ‘Storage is a mess.’ The image they use is not perfect, but it’s emotive. Every pitch deck needs to spend as much time as is necessary to ensure that investors get the pain. 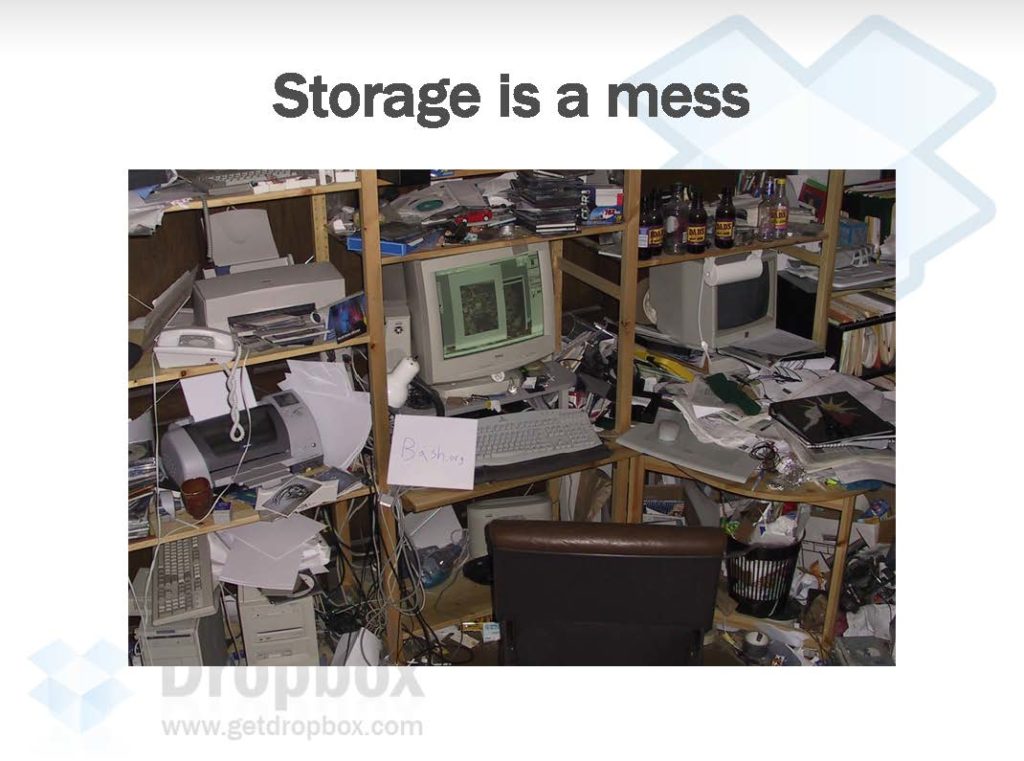 In the 2010s everyone was pretty aware that storage was becoming more relevant as well as inadequate. This was still when people were talking about ‘online’ and not the ‘cloud.’ Sameer Ghandi, Partner at Accel descibes being pitched as this:

Compounding this was the fact that “online” (no one called it cloud back then) storage was a wasteland of failed products and companies, and still there was a second wave of companies that were trying to do the next iteration of something similar.

In a blog I wrote entitled “Who are your startup competitors?” I shared a story from Dropbox raising. It went like this:

VC: “I know there are similar companies out there doing the same as Dropbox, why should I invest in just another similar company?”

Drew responded: “Yes. There are similar companies out there doing the same as Dropbox. But do you actually use any of them?”

VC: “Because they are bad.” 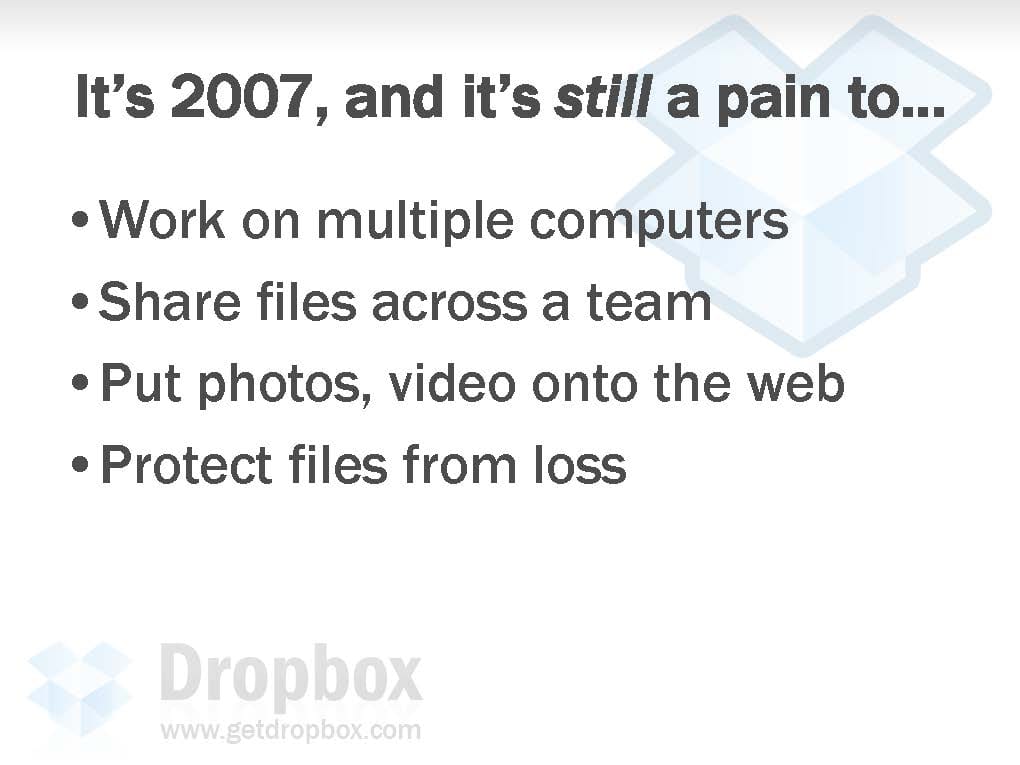 After explaining the problem, they spell out how people are trying to solve the problem that Dropbox have shared. It’s just 4 bullet points describing how people share information. Remember you always have competition and inertia or the way people are already doing things already. Changing behaviour from say USB to this Dropbox thing typically needs to be 10x better to really enact change. 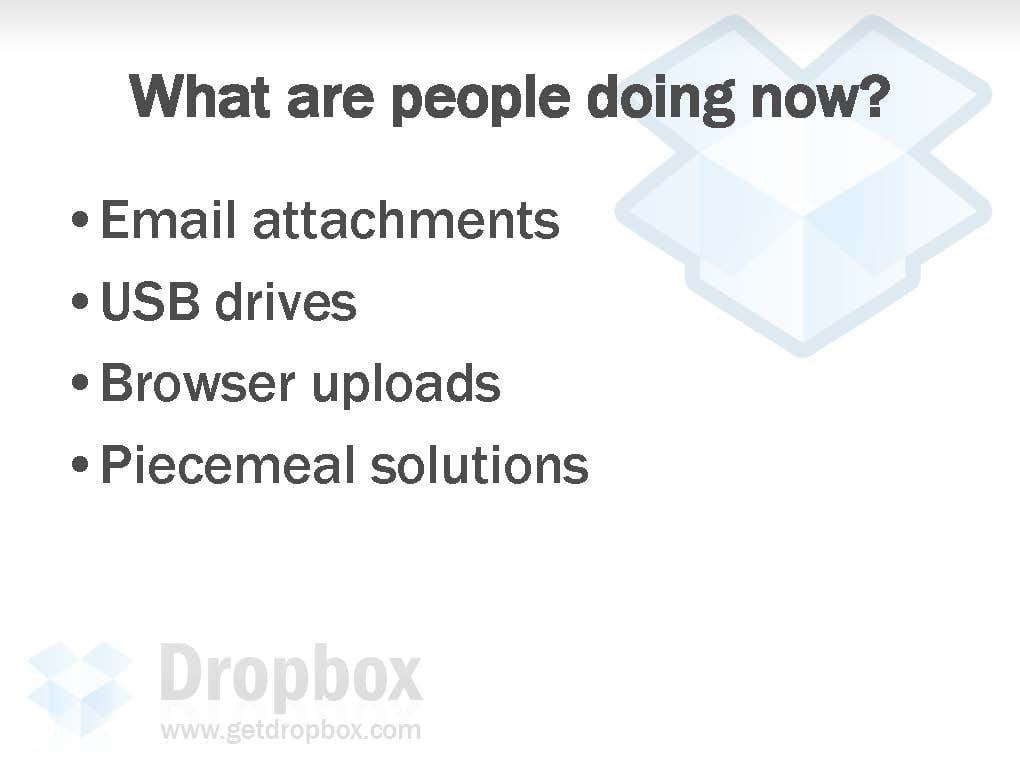 Next, they follow up and explain what the idealised future might look like. The focus is on simplicity, a solution that would just work without thinking or fear.

Like much of the deck, there’s a lot of text with few images. What they do well at least are: 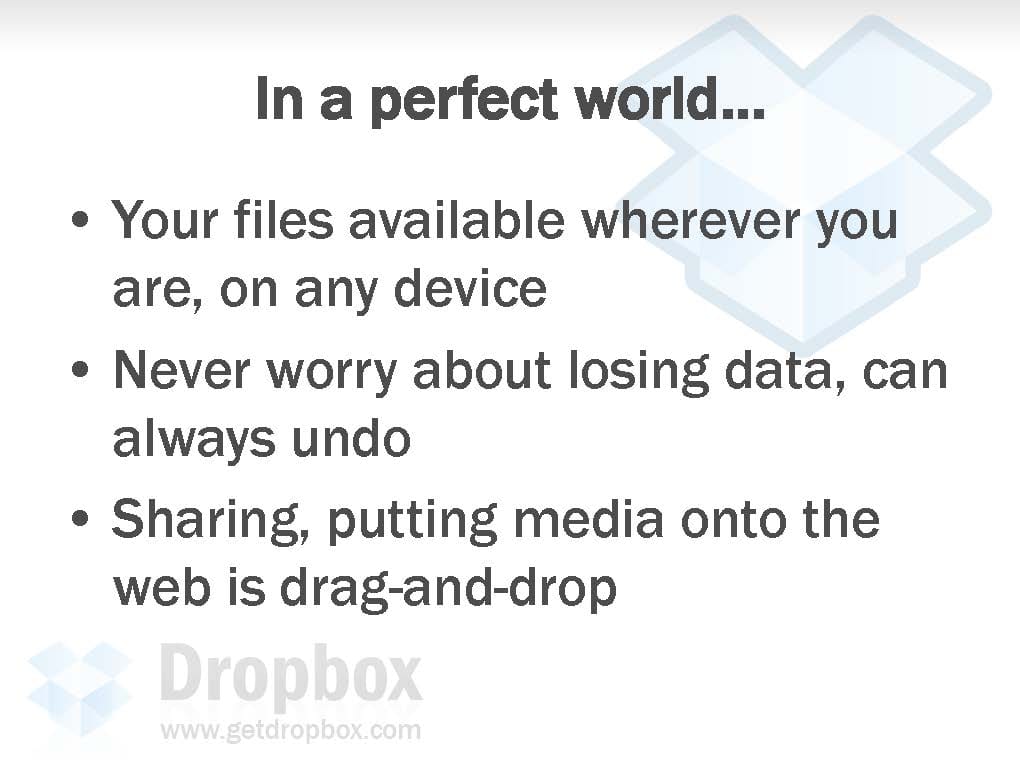 After discussing the idealised future they introduce Dropbox, their solution slide.

Firstly they explain what they do in four, very short bullets, They end the slide with the raison d’etre of Dropbox: it just works. 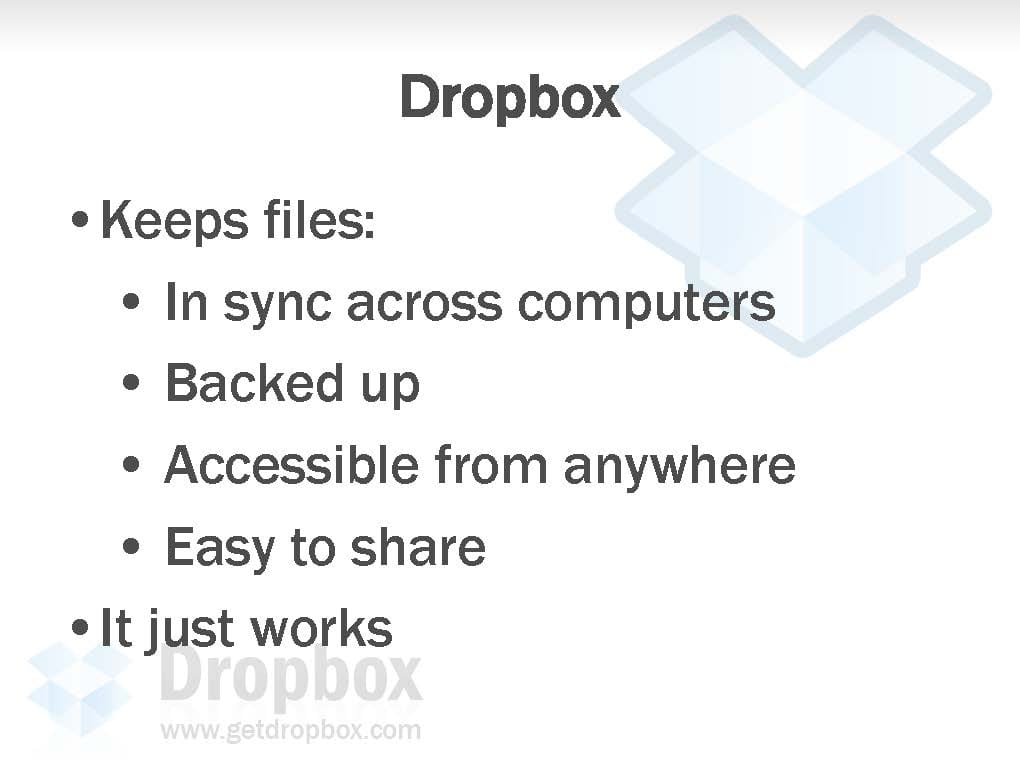 Their product slide shows a series of images of what the desktop and web application looks like. They write ‘Demo’ in a large font which implies that the deck is not used to explain the product, but rather pull out their computer and show it. Investors love demos, and I highly recommend doing them.

Some tips though. Demos go wrong, the internet stops working, the projector is in use in another room etc. My recommendation is to do this: 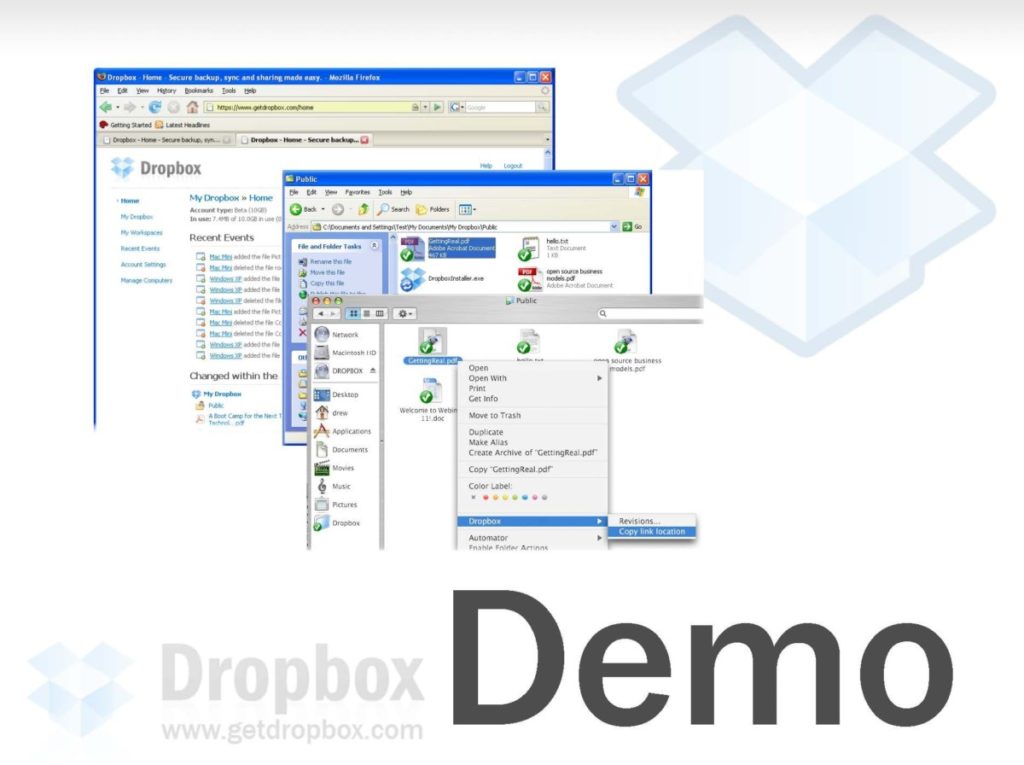 Timing is a slide that is not only hard to do well, but that most founders do not include in the deck. Timing matters! The main categories of good timing come down to:

These are both not entirely common. So your ‘food delivery’ app doesn’t have a strong why now at present and you’re going to struggle to write this slide, or you’ll just write some rubbish that isn’t really pertinent.

For Dropbox, people were using more devices such as a phone and the file sizes were getting larger. Importantly, the cost of storage and bandwidth speed/cost had reached a point that the business model would actually work, and maybe not even the year before. But the final points drive home that there is a big, glaring gap that needs to be served. 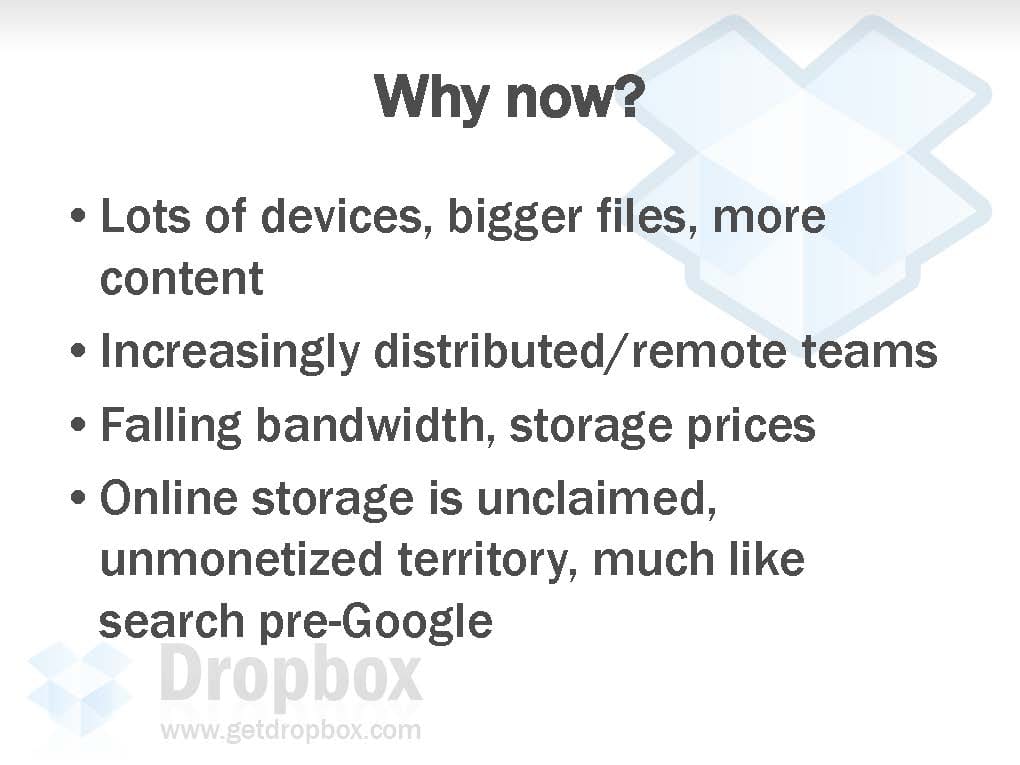 The team have described the product and how it solves the problem and why the timing is right, now they want to drive home why it’s actually a lot better than anything else. Drew categorises Dropbox as solving a problem for a large number of people, the ‘entire genre’ of storage issues.

I don’t personally think the OS integration is super compelling, it feels like it’s just a feature.

What is a really key point is that it ‘doesn’t make you change the way you work.’ Changing behaviours is reallllly hard! It’s likely a real cause of failure. 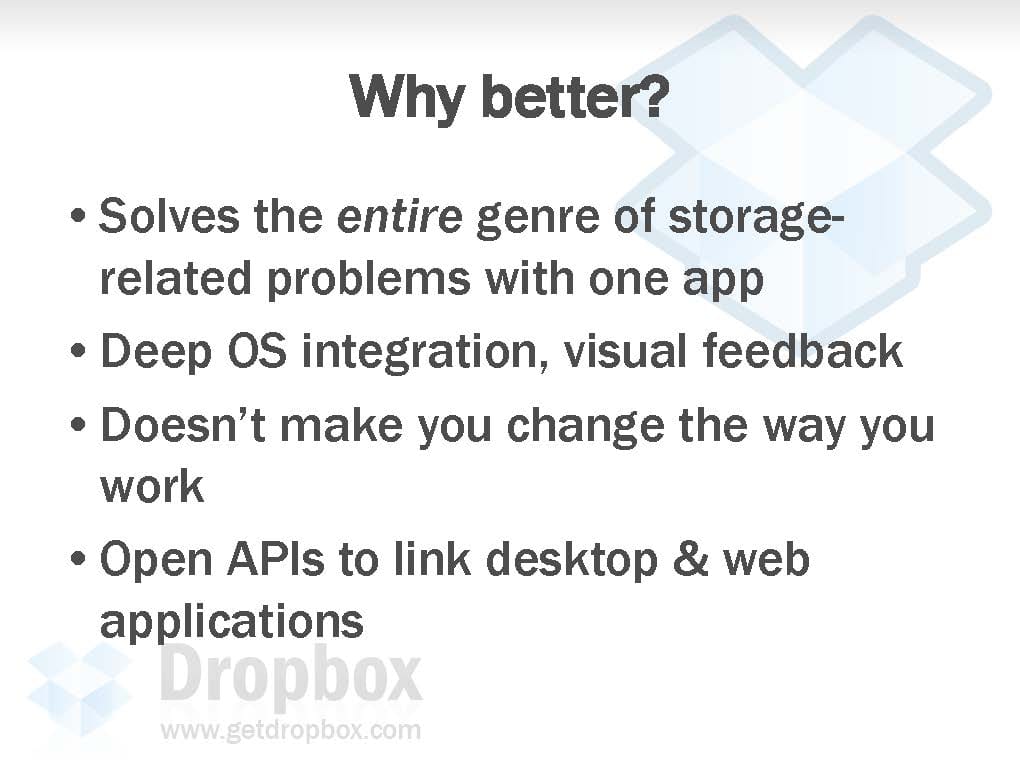 They share a traditional competitor landscape with a feature comparison. Typically investors hate these as they add little value and they know that founders are selectively picking the variables. In this case, the slide is quite reasonable with 6 variables and 3 competitors. The only one that I’ve heard of, is of course box 😉 Something that I think adds some credibility to the variables is that they are mentioned in the presentation. 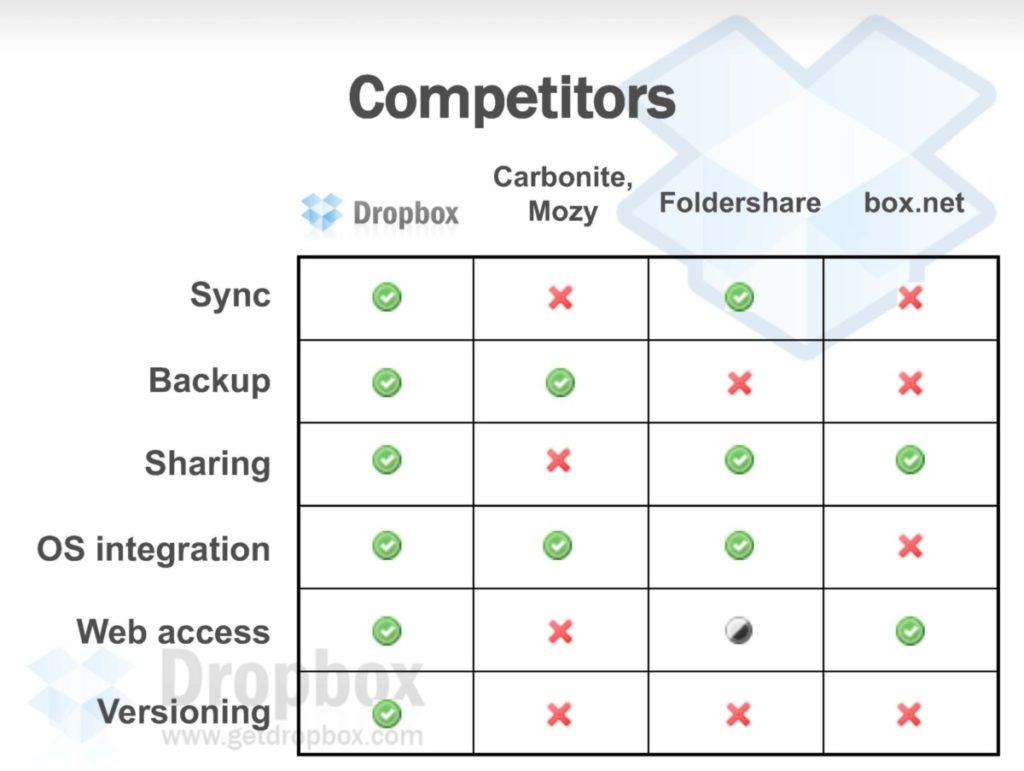 The previous slide just listed a bunch of competitors and what they do or don’t according to variables the team selected. The core thesis is that there is a problem and everyone else sucks.

So now the team spell out why the competition has got it wrong. Fundamentally the solution is a tech-based one and one that has to be holistic. I buy this but it’s in the ‘we solve things with features’ box- why can’t the competitors just get it right? Well, that’s something you sell.

One thing that’s wrong on this slide is the ‘lack of distribution’ specifically the partnerships. As you know, Dropbox benefitted from a near to viral effect. Jeff Bussgang a VC at Flybridge describes it thusly:

The other magical part of the Dropbox business model is that it’s so darn viral. Every time I share a Dropbox document to someone, they need a Dropbox account. Every time they set up a Dropbox account, it drives more document sharing and storage. And the cycle keeps going. 100 million new accounts in 2017 is another stunning number, proving that the viral machine continues to work well despite what some may worry is a growth saturation point.

No definitions matter when you use the term viral. Virality is a really crazy thing. You have to truly understand accelerated compounding to really grok it. Dropbox wasn’t viral, but it illustrated a lot of the components of it. If you want to learn about virality, check out this blog and a massively detailed and free excel model to download. 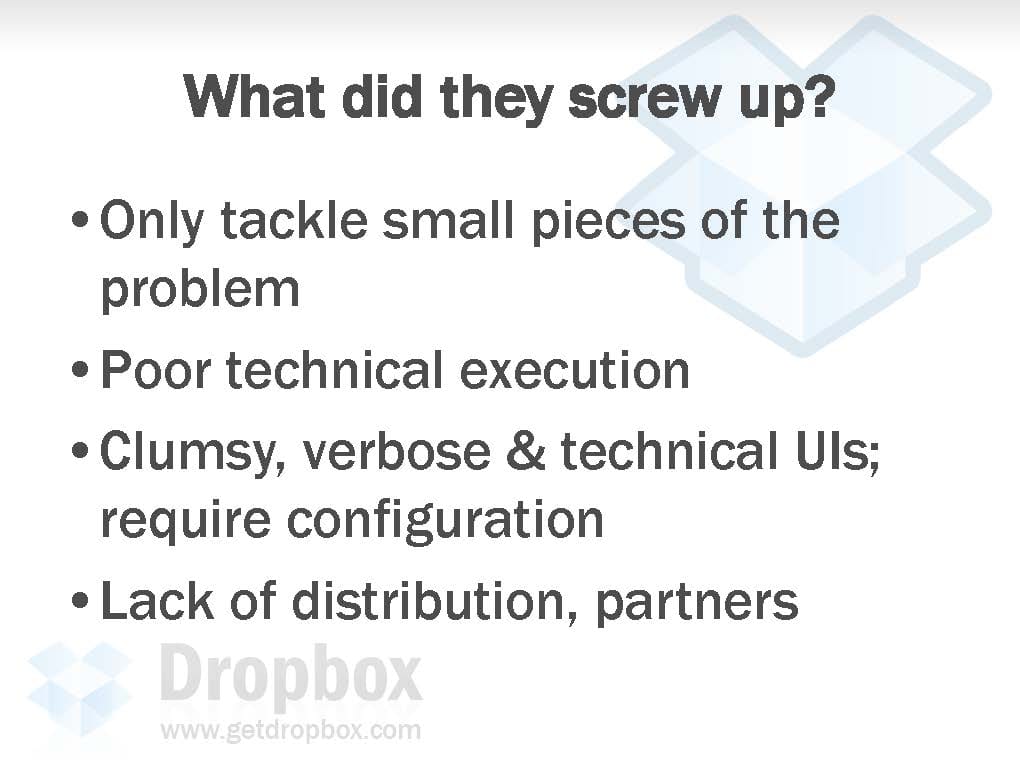 As they described the competition screwing things up (largely technically) they proceed to explain the technical advantages they possess. Ok… they use Python so they can ship code faster.  They are using what I was presume was recent tech of S3 and EC2 instances. And they do some other techy back end things to support the experience. ‘Obsession with performance’ is not a technical advantage but it contributes to the mentality of the team. If you KSF is performance, then this plants seeds in the investors’ head about why to pick the team. 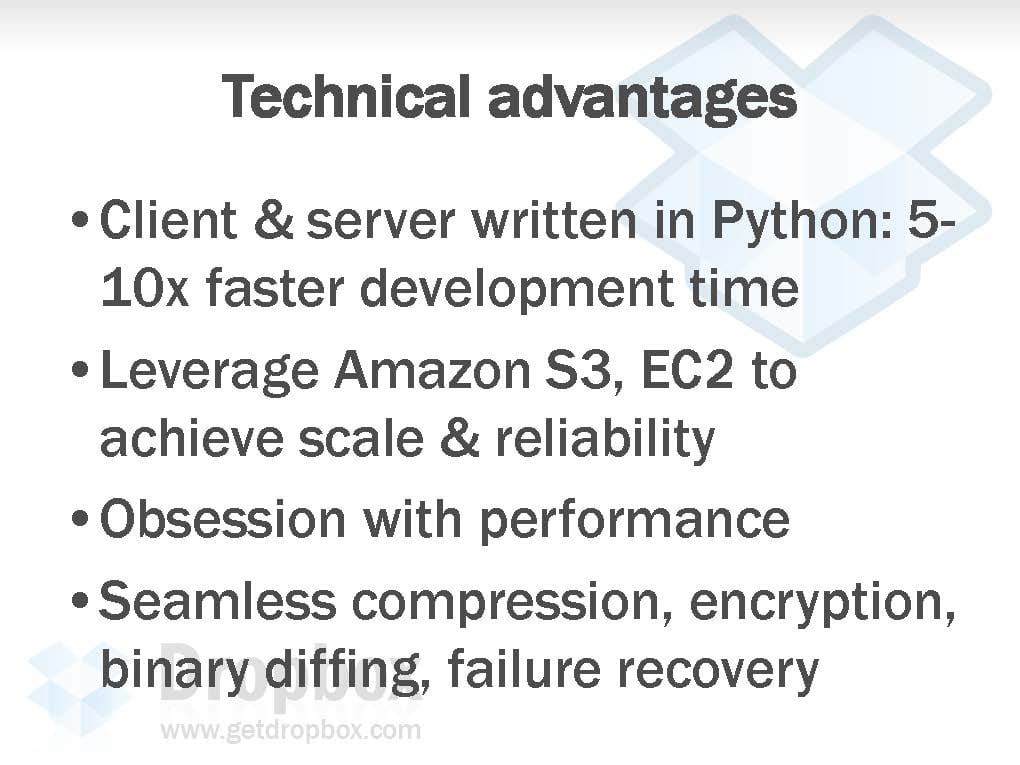 There are two founders. Look, there they are in startup t-shirts. For early stage companies, I like founders looking like this.

A lot of founders will just put up a picture of themselves and their name, maybe their title. That is sooo not interesting. They chuck in some interesting facts that provide some colour, such as being a total nerd (coding at 6 or getting multiple perfect scores in SATs). This says a lot more than just ‘Google’ which Arash has (and is obviously credible too). 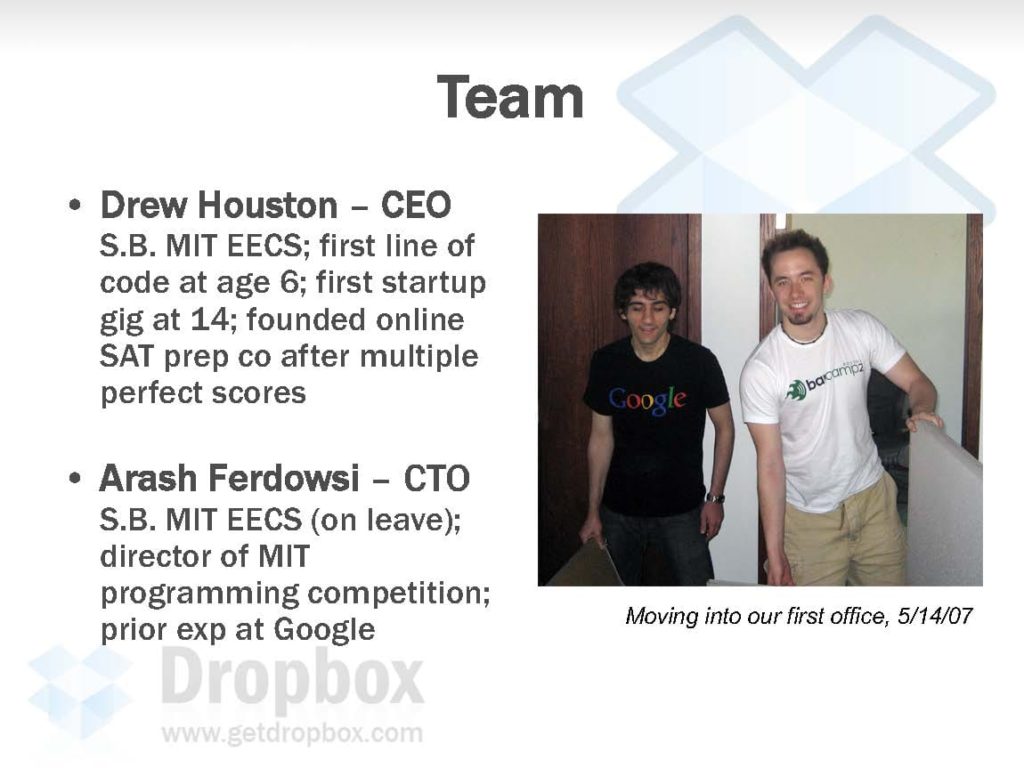 How they make money isn’t super clear, but it’s well defined. For individuals it’s a freemium model- that’s their business model. For SMB it’s per seat, but they also explain why people will pay for it, which very few founders think to add. I don’t think the platform bit ever came to fruition, so it’s just an idea that sounds big and maybe plausible. 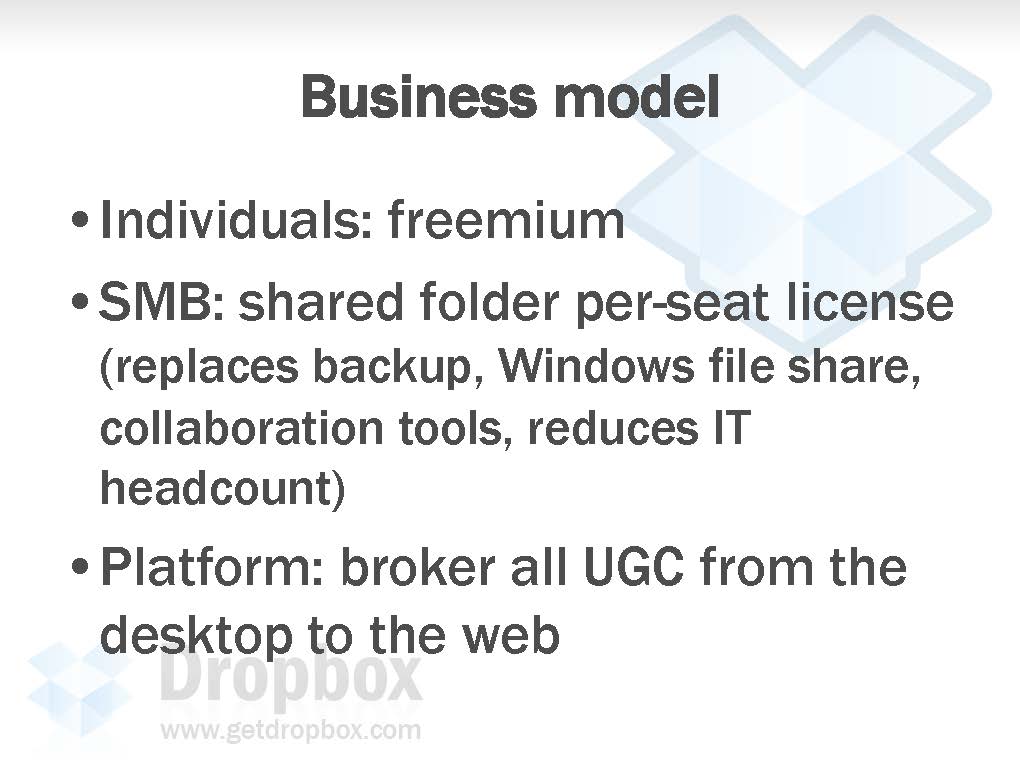 That last point I made about platform clearly needed to be explained, which they do now. The idea is decent since I personally hate the way I have to upload images to WordPress and it’s still annoying. I hate to think what the bandwidth cost would be for this though. It would also require a tonne of integrations and I’m not entirely sure who would pay for it. The idea has some logic though from a strategic point of view- you want people to think of Dropbox as the connection to the internet in terms of file sharing. That’s sort of a cool vision. 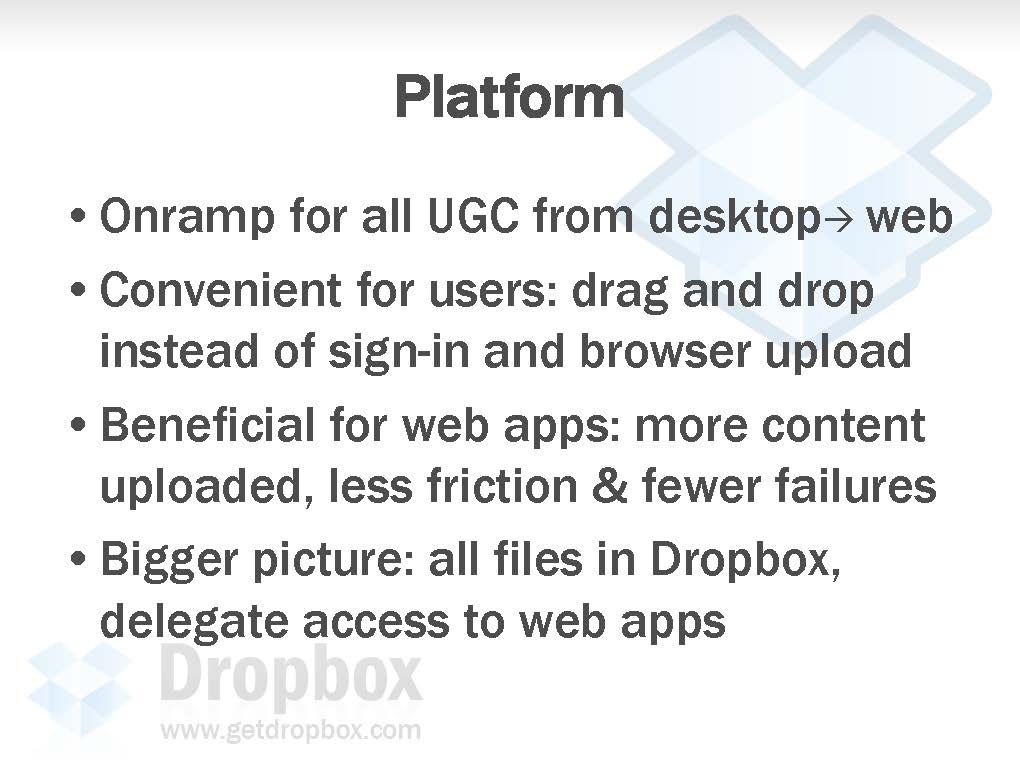 We’re almost done, so the last little thing they need to deal with is go to market, or rather, how they acquire customers. What they proposed actually worked out for the most part. Users did love their product and were influencers, encouraging others to sign this up. Free accounts started a quasi-viral effect, but you know that.

The platform thing again never went anywhere. It’s really naive to think that platforms will be a magical channel for user acquisition- it never works (in my experience). The platforms are only interested in your users and not giving theirs away. Bus dev deals around here are only going to go anywhere once you already have a large user base. Just saying. 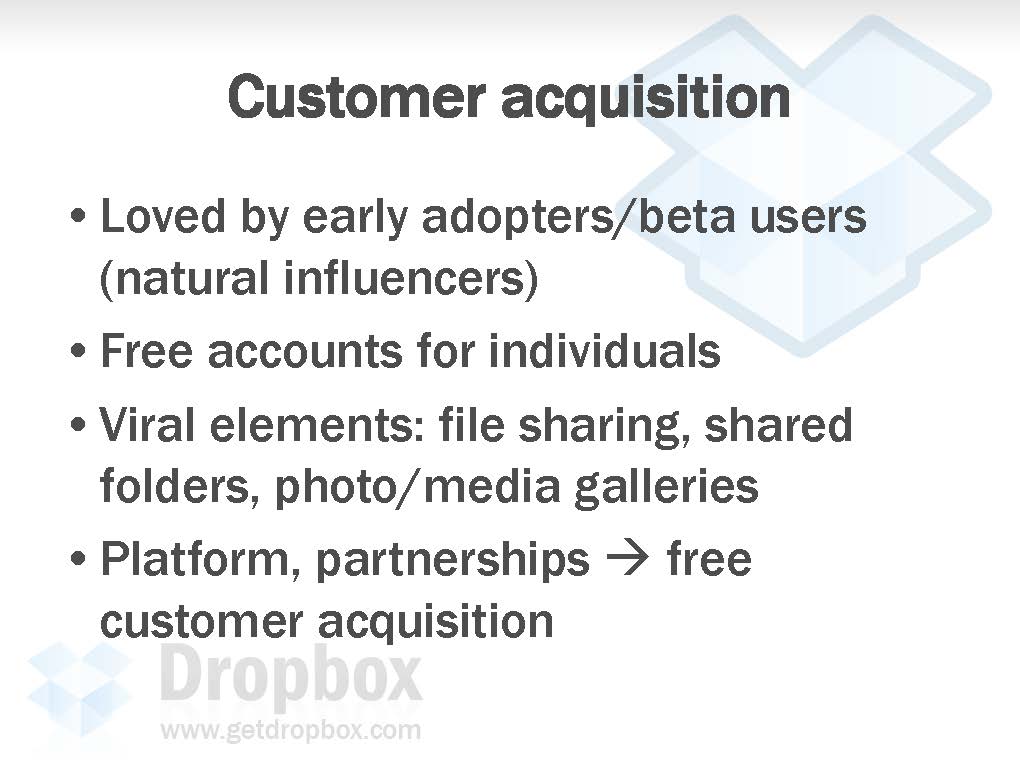 The final slide is some social proof. Yay, we’re the #1 company at YC. And btw, Venture Beat wrote about us saying some nice things that support what we have been telling you Mr. Investor. This isn’t my idealised way to end a deck, but it’s not terrible. Leave things on a high note. 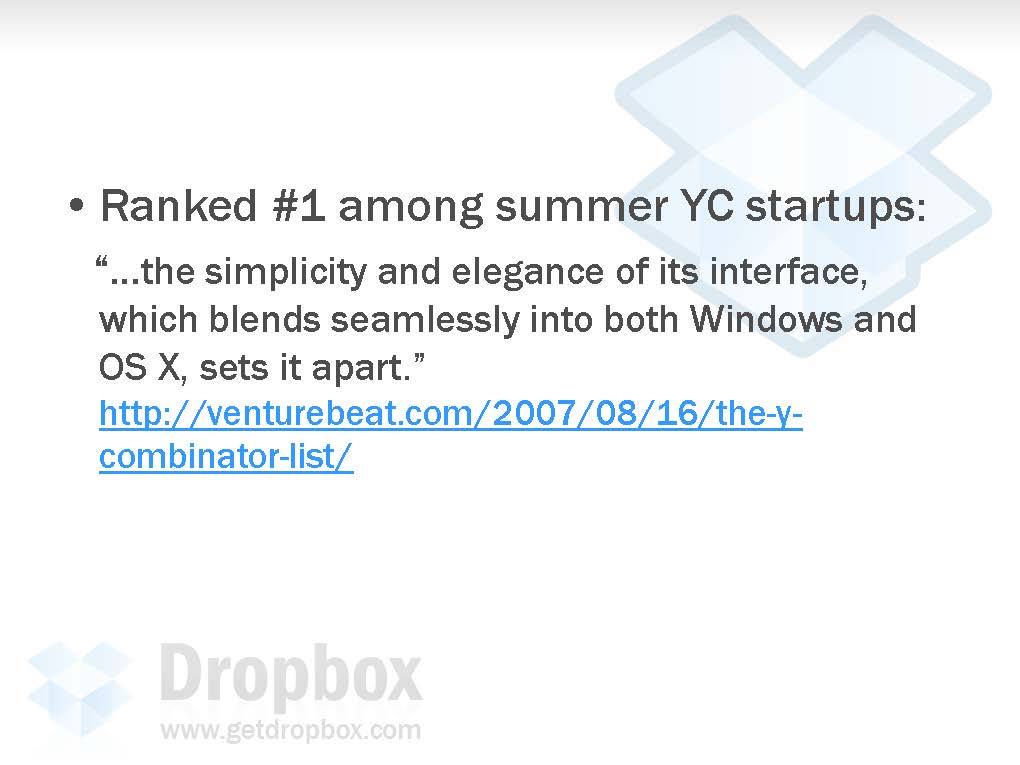 There you have it. What did you think about the dropbox pitch deck?

Need help with your deck?

Reach out and we can kick your ass and get it done!