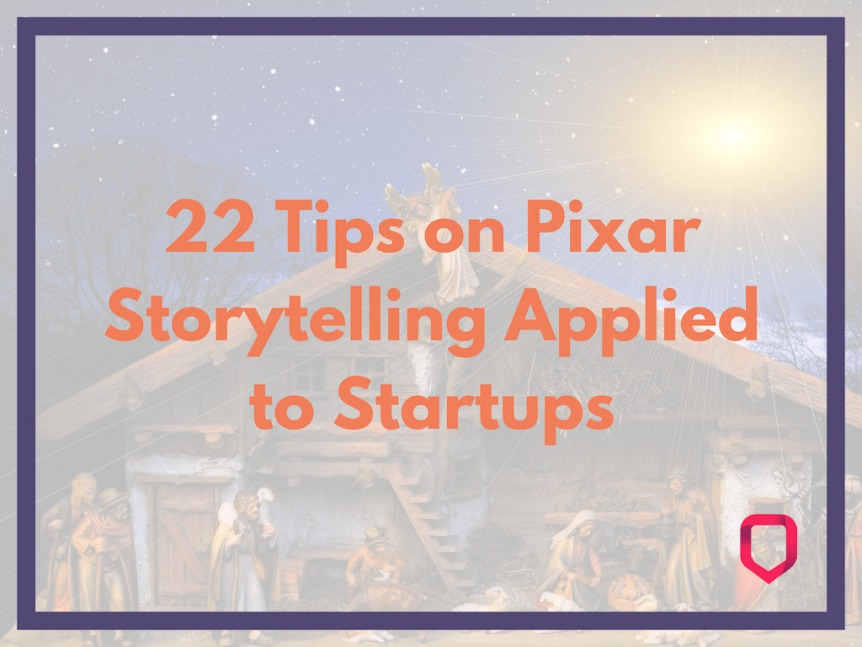 Tl;dr: Tips from Pixar on how to tell a story better and applied to startups so you can pitch more effectively to get the investment you need

As I frequently write on this blog, you need to tell a story when you are pitching, and that’s not just for money from investors. Telling stories is not the simplest thing for most people, unless you grew up in a pub in Ireland etc. So pointers never go a miss. Here’s some from Pixar.

In 2011 a Pixar person called Emma Coats, tweeted 22 storytelling aphorisms that were then compiled into a list and circulated as “Pixar’s 22 Rules Of Storytelling”.

She said that the Tweets were “a mix of things learned from directors & coworkers at Pixar, listening to writers & directors talk about their craft, and via trial and error in the making of my own films.”

If you want to really dig into these tips (more from the perspective of filmmaking), then some other Pixar dude wrote an ebook that you should check out. Details on the 22 tips- check out the ebook.

I’ll explain some tips in startup terms when pitching investors. The list is at the end of the blog.

You gotta keep in mind what’s interesting to you as an audience, not what’s fun to do as a writer. They can be v. different.

You are pitching an investor. They want to hear things investors want to hear. No crap Sherlock! But so many founders don’t think and communicate in commercial terms.

You pitch people all the time in startup land. You pitch to companies to close sales, you do business partnerships, and you pitch to hire staff. The only commonality here is that you are selling to get something you want. Each audience is buying something different though and so they need to hear what they want to hear.

When you are pitching an investor you need to think about this audience specifically. You aren’t trying to get them to buy your product, they want to buy into your company and it’s prospects.

Great pitches tell a story that engages with the audience. This is an exercise you can use to structure your story. Obviously, you aren’t going to say ‘once upon a time’ but you get the picture.

“Maybe stories are just data with a soul.” Brene Brown

The outline here is the same as every story, there is a beginning, middle and an end. Stuff happens to make that all interesting

When you pitch investors set up the scene, explain what’s changed and how the world will never be the same after you have had your merry way with it.

I’ve written a detailed blog on just this topic, so I’m not going to rehash it here. A storytelling pitch exercise improv artists use which can help you raise.

You admire a character for trying more than for their successes.

Investors want you, the protagonist, to win (well, if they invest anyway). All startups start out as the underdog seeking to battle Goliath. Startups are all crap shows. Everyone does and will continue to do stupid things. VCs know this as either they were a founder themselves and so they get it, or they have a load of portfolio companies that are ‘sidewards deals.’ You are not going to be the only startup in the world that has pivoted or made an almost grave error.

Share what you have learned from how you have failed. Weave how you have overcome adversity to get to where you are today. It helps them relate to your struggles and marvel at your resilience. Put another way, if you share with investors the stupid things you did, they’re happy you aren’t going to learn those mistakes with their money now!

You are the lead character of your story. You are battling against the odds (0.00067% chance of an exit), facing competitors, and with your back against the wall as you aren’t profitable you have yourself the makings of fab story. Give investors a hero to root for.

When I was younger, I like you, had no fricking clue what I was doing when I was writing pitch decks. I thought I had ‘one shot‘ to write everything about my startup and if it wasn’t on paper it didn’t count. That’s rubbish. I would write dense 40-page decks that no one would really want to read. Don’t.

Great pitches say just enough to captivate the attention of investors. Once you have their attention you can share more. If you have 10 points to make, write the 3 most important ones. If investors want to know more share some more when they ask.

When you have written your deck, go over it like a word Nazi and remove everything you don’t really need. Listen to this frog:

A good example is to focus on what you are doing now, not all the things you want to do. This keeps your story focused so you are easier to understand. Later in the story, you can talk about ‘expansion’, building on the foundation you set.

What’s the essence of your story? Most economical telling of it? If you know that, you can build out from there.

This is linked to the next point quite closely.

Basically, figure out what kind of story you need to tell. If you are at series-b, it’s a growth story with stats. If you are an early stage, it’s about your insight into an industry problem and how you are going to solve it, or have proven there is a problem etc.

Finish your story, let go even if it’s not perfect. In an ideal world you have both, but move on. Do better next time.

Firstly, finish your pitch deck 😉 There is no such thing as a perfect pitch deck (Which is ironic given I started a company called Perfect Pitch Deck…), the perfect deck is one that is merely good enough.

Secondly, you will get your deck done faster and it will be better if you first decide what you want to say. The way I write pitch decks is to outline the story first and then read it to see if it captures what the founders want to say. If it’s not right, who cares? It’s only 9 bullet points or something. It’s not like you have gone and written a tonne of slides you don’t want to kill now because of the sunk cost.

Boshing out a first draft really helps you to review what you do and don’t want to say. It’s the process that matters. Which ties to the next point…

No work is ever wasted. If it’s not working, let go and move on – it’ll come back around to be useful later.

Sometimes you learn more by what doesn’t work than by what does. Kill your darlings. Edison said “I have not failed. I’ve just found 10000 ways that won’t work.” All those ‘failings’ helped to get to the right place.

Maybe you did a bunch of work analysing SEO search volume and then some dick like me tells you not to put that in the deck as it’s not core. You get annoyed with yourself for wasting time. But if a VC asks about your search volume as you said search is key to your go to market strategy, well now you have the answer prepared.

Why must you tell THIS story? What’s the belief burning within you that your story feeds off of? That’s the heart of it.

This is a great point. Why did you start your company? Why do you need to solve this problem? What is driving you?

Why matters and investors want to know.

You just need to know yourself first 😉 Just wanting to make money may be the truth, but best not to admit it right now. Make something emotive up if you are a startup mercenary!

For you to really resonate with investors you need to know yourself. Self-knowledge and awareness are at the root of great storytelling. When you are authentic, people can tell. It’s like smiling on the phone – people can sense it.

“This above all: to thine own self be true
And it must follow, as the night the day
Thou canst not then be false to any man”

22 Tips on Storytelling from Pixar

Pitch decks and pitching are a combination of art and science. These points won’t fix your business, but they will help illuminate it in a more compelling way. They can really make the difference between funded and ‘bootstrapped’.

Which points did you think were the most interesting?