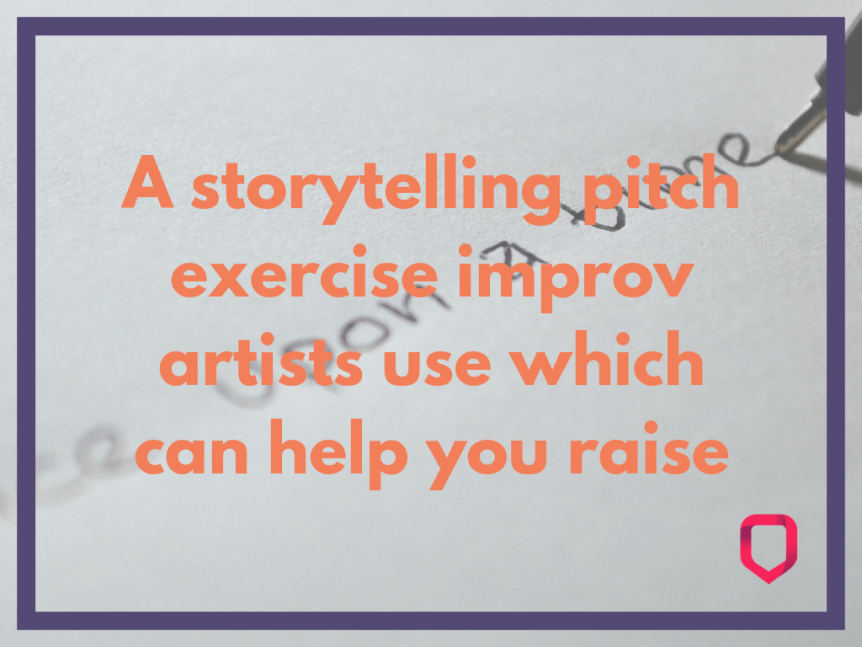 Tl;dr: A step by step exercise to help you write a compelling story to get investors to engage with your pitch

Seth Godin, describes marketing as “the art of telling a story that resonates with your audience and then spreads.”

The biggest brands in the world tell you stories to buy $1,000 phones…

Storytelling matters. It doesn’t come naturally to people so frameworks to help people were invented.

The ‘Three Act Structure’ is used in any play you have ever seen:

The point of the acts is to make sure that the story evolves and the stakes get higher and you ultimately get funded.

“People have forgotten how to tell a story. Stories don’t have a middle or an end any more. They usually have a beginning that never stops beginning”. Steven Spielberg

This is basically saying that you have a beginning, middle and an end. That’s useful to know, but it’s a little hard to act on, right?

One useful exercise is the ‘Story Spine‘. This structure has been used by improv artists up to major companies such as Pixar to sell blockbusters. It clearly works for them because in a hit based business, they are still around after a decade or two.

Most stories can fit into the following structure:

Two parts to a deck

There are two applications to this exercise.

Here is one learning.

There are two parts to a pitch deck.

This exercise deals best with the first part and setting up the industry and problem for the customer and then up to how you make customers happy now and have good traction ‘every day after that.’

I have tried to fit the Story Spine into your whole pitch deck.

It’s easier to just apply it to focusing on the story part in explaining your market, problem, solution, and traction though.

The basic outline is this

Let’s look at Super Mario Brothers as an example for the story spine.

Now here is a BS startup example I’m going to make up on the fly…. fingers crossed

Breaking down the story spine

Once upon a time…

This is a cliché that has been used for centuries to tell kids stories. Now sure, you aren’t going to use these words but you need to take the learnings to know how to set things up.

Pretend you are the investor being pitched. What would you want to know? Intuitively:

Your first step as an effective storyteller is to introduce your target market, the industry you are in and what is happening in the world your customers live in.

The key slides here are:

This is a story, you don’t share everything about your prospective customers and their business. You just share enough so investors have enough information to visualize the world and understand the story that is to unfold.

Making your company the hero of the story is boring. Of course, you are going to be the victor, but making your customers the winner is how you will profit.

Now you have introduced your customers / characters and industry / world, now is the time to explain what life is like for them. You want to show how they go about their day and explain the pain points.

You are explaining their daily routine without your solution that you provide and will soon talk about. Doing this lets you, in the words of copywriter Robert Collier, “enter the conversation the prospect is having in their mind.”

Being able to explain the customers succinctly will also demonstrate you know your market intimately.

The key slides are:

Explaining the problem right isn’t always easy. You need to figure out the best way to explain this. In my experience, this typically happens over a number of slides. You really need to make sure investors understand the problem otherwise they might think what you are doing is trivial and there isn’t a big market to make money.

The market always wins. If your market is 50 broke hippies you are screwed. Investors need a big market for a big exit. You need to communicate a big problem that a lot of people have and are therefore willing to pay for. This is really important. I get into it in this blog: How big can this get? Market sizing has killed many startup fundraises.

By now the investor gets who your target market is and their pain points. Investors know your users have a pretty sucky routine/life and they will continue struggling unless something changes.

Now is when you introduce a change or breaking point, known as an ‘inciting moment‘ in copywriting language. Your users have had enough and they discover your service.

The ‘timing’ slide is a hard one for most people, as there really isn’t some huge change in the industry like a regulation change, or the advent of mobile, or social media. If you have one, then you are going to explain how the GDPR will force people to a change, or that the fact Americans deductable payments have reached 51% now so insurance doesn’t make sense anymore. If you don’t have a good reason for timing… I skip the slide…

Implicitly here, you are also showing factors like you have a scalable solution.

And because of this…

This is the beginning of Act II, the main body of the story. We have entered the execution section.

You, the protagonist begins the pursuit of your vision to solve the problem. You know the problem and there is a need, now you need a team and the right solution for which you build a product. You know you will encounter obstacles along the way with competition, flying monkeys and the like, but this makes the narrative more interesting and compelling. No one has been able to solve this, till now.

Team is your team… It’s a picture and a few bullets. You explain why you are the best people for this and why you are so motivated to solve it.

On solution, you are introducing to investors that there is a new realm of possibility now and the problem can be ameliorated. You communicate that that the problem not only can be solved but get them to appreciate what it would feel like. You want to excite investors with the possibilities and engage their imagination.

Competition is who you compete against. You ALWAYS have competition. Inertia and the status quo is competition. Explain why you are better and different. Sometimes I add a slide ‘Why has this not been done before?’ It depends on your company.

Product is your product. I show 4 images and a brief explanation. You then can do a demo to explain more. If you want to learn, here is a blog: How to do a demo in a venture capital pitch.

You deal with your business model to show how you make money. If you have many streams of revenue show the % allocation to each to show how meaningful they are.

Now you have entered Act III, you want to close out the story on why it’s a great story and how you make it a huge one. You have set the scene, positioned the challenges and how you will solve them, now you want to show why they should invest.

You spelled out why customers will take up your solution, why it is so impactful and now you show it is working through your ‘traction’. You then drop the ‘special sauce’ bomb on how you build a defensible business on that traction as you expand.

Special sauce is special in so far as a lot of people don’t really have it. There are only a few real forms of defensibility or competitive advantage:

The ones founders use that are decent but dubious are:

The ones founders often write, but if you fall in this category you should delete the slide are:

Now, for traction, this depends on you and what god gave you.. Sell it. This is so specific it’s hard to give specifics. If you are later stage you have a load of slides, if you are early, then you have one. List whatever you have and the prioritise it, then figure out how to show it.

And ever since that day…

We have explained what has happened to date. Now we are getting into what this all now means and the next steps to a greater future with you helping more users- so how do you plan on doing that? You want to tie it all together and get to the point of getting money from investors.

This is your ‘happy ever after‘ slide, but clearly it will take some $ to bring that to everyone.

The key slides are:

Expansion can be illustrated in a few ways. It really depends on you. It could be adding more marketplaces, hiring salespeople, expanding into new geographies, who knows. You need to keep it simple but compelling and believable.

Fundraise is a doozy. How much do you want and what milestones will you achieve with the money to make the story impactful to more people? You can see examples of how I do slides on Perfect Pitch Deck.

Pixar on the story spine

Pixar have made a training course on storytelling. You can watch this basic video here.

Bill Murray is a funny fecker as well as being a wonderful storyteller. In an interview with Howard Stern, responding to “Is it something you are born with?”:

“No, I don’t think you’re born with it. You have to hear stories and you have to live stories. You have to have a bunch of experiences and be able to say ‘Here’s something that happened to me yesterday….’ And if you can make people laugh by telling them what happened to you, then you are telling the story well. So that’s what I learned in improv….”

Here is an example of Bill telling a story about how a picture saved his life. It’s short, watch it!

Effective storytelling is hard, but it’s something you get better with practice. Not only will it help you raise money, but it might help you get laid… maybe. Depends how ugly you are ;).

If you want more tips on storytelling hit up 22 Tips on Pixar Storytelling Applied to Startups.

Confused and have questions?

Book a free, confidential 15 minute chat and we'll explain everything you need to know.
We will schedule a time to chat.